We have designed and built a robot in "design, build and compete" category of competition called IZTECH RoboLeague

This robot has been designed and built in 24 hours. Its abilities are following line, differentiating objects on the road, hitting objects with its end effector and grabbing objects.

In the video you can see our robot and competitor's robots as well. I gave a little push to robot because of low level of our battery. It was a mistake.

I really don't like using kits for building a robot. Unfortunately, to catch up with the deadline of orientation days, I built this robot. Its name is welcomer. We used it for capturing the attention of visitors who are coming our Technology and Robotics Club's stands.

Robot is computer controlled over bluetooth and has ability of shaking flag of our club and move in all directions.

One of the biggest robotic project of me. In this project I have work with my classmate who is Sevket Yuruker and together we came up with this design. We have prepared a report which has 74 pages, 33 figures, 123 equations and 1280 lines of code.

This Robot has been designed under the course called Machine Design.

I have built this robot under the course called microcontrollers in Ozyegin University.

​In this project I mainly depend on pololu servo controller.

​The AT & AT Walker Project is in the field, where robotics and entertainment merged. Our robot will be controlled via your cellphone with the help of wireless connection. You will be able to connect and play with it ! You can move its head, use its fake weapons, play soundtracks of STARWARS and even Darth Vader and a Storm trooper will come out with your click. Its height is 2.6 meters. 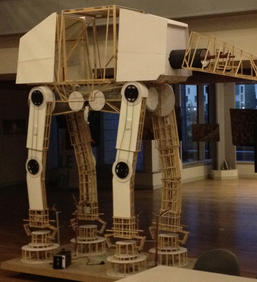 Robot Name : AT & AT Walker

As Technology & Robotics Club we have high school club connections. One of them is TEVITOL. With the students from TEVITOL high school we have built a robot that can play basketball for the FIRST ROBOTICS competition. I was in charge of circuit connections of the robot (electronics part).

and Technology and Robotics Club

Chemical Carrier 2  is the first robot that built by a student team of Özyegin University. I was the project leader for the robot. Our aim as Robotics Club was transferring cargos which are not touchable by human. Its abilities are grabbing an object up to 0.6 kg and move in all directions. Its arm has 3 DOFs

In Technology & Robotics Club we have built this robot to entertain our stand visitors. We wish to make them blast balloons by controlling shooter. Its platform has 2DOFs and the robot is radio controlled

I have designed this robot to discover inside of air circulation channels. It is radio controlled and it has  tv connected remote camera on top.

In my younger ages I have built this robot for marking places from a distance with a laser.

I was also aiming to make movements for simple laser shows on the wall of buildings. Its head has 3 DOF and the robot itself is remotely controlled.

I tried to imitate my hand. I used wooden blocks and springs to get finger motions. My hand could move its 5 fingers independently and it is remotely controlled. It is ranked 1st in the science festival of my high school

Chemical Carrier 1 is the first robot of myself. Its upper part has 4 DOFs and it could carry cargos up to 0.4 kg. I built it with my limited knowledge and material. After this robot, I find path of my life which is ROBOTICS.

​It ranked 1st in the science festival of my high school