Project Name : AT & AT Walker 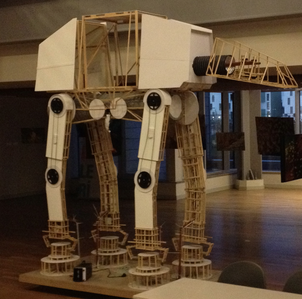 ​The AT & AT Walker Project is in the field, where robotics and entertainment merged. Our robot will be controlled via your cellphone with the help of wireless connection. You will be able to connect and play with it ! You can move its head, use its fake weapons, play soundtracks of STARWARS and even Darth Vader and a Storm trooper will come out with your click. Its height is 2.6 meters.

In our Robotics Research Lab in Ozyegin University,  we are working with KUKA KR  6 agilus and safety comes first.  I developed a system for safety. Virtual cage is a laser beam based system. If someone steps in the danger zone accidentally, the robot immediately stops. Laser beam is creating a virtual rectangle with the help of mirrors inside the danger zone. It works only if you operate robot in the automatic (fastest) mode.  In the version 1 laser beam pillars were wooden. In version 2 the laser beam carriers specifically designed and produced with 3D printing. Now they have 1 dof .

To teach the basics of building robots a new project is taking  place. As IEEE Turkey Section we will publish 8 episodes over our youtube channel. They will be at max 20 mins long and about "How to build a robotic hand".  In this series new students who are interested in robotics will be able to build their first robot by following the episodes.  At the end of the workshop we believe that beginner students will say 'my first robot was a bionic hand' instead of saying it was a line following robot. 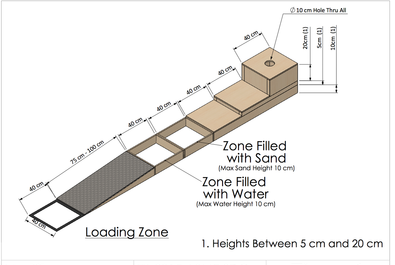 I will attend student design competition which is organized by ASME each year. This year's concept is called 'robot for the relief' I have sketched my robot and started to design its parts according to their specifications. Due to competition I am not able to show my visuals. You can see the playground on the left which our robots will compete on.

After iterations on MATLAB, I will come up with the final design. My aim is to win the competition in Europe and then in the USA.

No Supporters:  Individual Project for competition

We are willing to create a web site that brings beginners and professionals around Turkey about robotics. In our website there will be 2 entrance. One for professionals and the other one is for the beginners. Robot building platform will have very easy interface. You will log in, choose robot type that you want to build and just follow the steps which are going to be under 3 subheadings: Mechanical, Electronic and Programming. Then you will have your robot. Anyone who is willing upload their robot will be welcomed and we will clasify robots under some types like hexapod, quadrature, humanoid and etc.

Just choose your type and start doing  it.

In this project we are willing to increase the activity between student sections of ASME around the world. First trial project will take place between Lebanon and Turkey. Goal is very basic. Both teams will build same robot and each team will connect these robots to internet. Then the each team will prepare an interface for controlling the robot. Teams will start at the same time. By controlling the robot for example, team in the Lebanon will try to write 'Lebanon' in Turkey with the robot by using letter cubes provided. Same goal for the other team as well. After trial project we will prepare an introductory video and publish it over youtube. Finally global competitions / events overseas will take place. 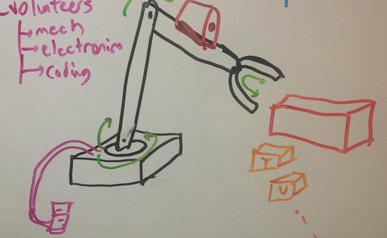 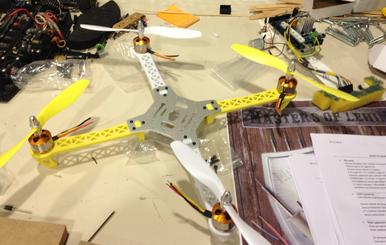 This project is one of the easiest one.  We will build a quadrotor in a cheapest way. Value addition will be in its gimbal part. With my team we will redesign it and produce the parts from 3D printing machine. Our goal is to achieve maximum stabilization for camera recordings.

Supported by:  Technology and Robotics Club

Our aim is to take attention into sea pollutions around the world. As a volunteering initiative called "Duyarli OzU" in Ozyegin University, we are educating and informing university students for better future.

One of our project is about  reusing the waste bottles and making a bottle house. This house will turn into a museum at the end. When you enter inside you will see the harms of sea pollution.